Rarely do I hear from my principal on the weekend, unless I’ve shot off a series of “I was just thinking…” or “We could try this…!” messages to her. She’s always a good sport about those. On Mothers Day she emailed me.

There’s a situation. Second grade is scheduled for a field trip on Monday and two of the three teachers will be out sick…plus a dozen other staff members! I’m in PPTs and the other person I would ask is covering SBACs for another teacher who’s out. Can you, please, go on the field trip?

My response? Of course.

I hit send and realized I actually had no idea what I was getting myself into. Where was the field trip? What time were we leaving? Getting back? My answer wouldn’t have changed…but I might have packed a different lunch.

This, I told myself, was going to be an adventure.

Turns out we were going to a play about Pete the Cat.

Fast forward through the hurried morning routines as students unpacked the lunches they wouldn’t eat until 1:00 and used the bathroom for the last time before lunch. (Hmmm…)

Nearly sixty second graders were lined up in the front hallway of the school. Chaperones dotted along the lines. I gave the kind of rallying speech that I imagined championship coaches gave in the huddle or the locker room. You know the one. It went something like: please, oh please use good manners at the show! You’re representing our school. A gaggle of seven year-olds gave a thumbs up with their assent. Though one was convinced we were going to a movie theater and couldn’t understand why there wouldn’t be popcorn.

A breakdown they said (or possibly not). They were sending another bus. It would only be another ten minutes (or so).

“Second graders,” I stage whispered. “Make a circle right here. Pretend we’re sitting around a campfire.” I settled myself onto the floor and leaned in conspiratorially.

At this point, not only were the chaperones standing witness, so were several aides who collect notes and lunch counts in the front lobby, the school nurse, and my principal.

I looked each of my borrowed students in the eye as I gazed around the circle. “I’m going to teach you a game I used to play with my dad. And then I played it with my own boys.” I peeked back over my shoulder as if looking out for trouble. I looked back at the class and motioned for them to lean in close. Just above a whisper I continued over the rising ambient noise of the other second grade classes. “Here’s how it goes. First, you invent a character.

One of the boys called out, “Mr. Elephant” as if challenging me to address his manners or what he clearly intended to be an absurd choice of character.

Taking it in stride I mused, “Hmmm…he’s probably going to need a friend, someone else for our story….How about Lady Giraffe?” (Josh Funk’s characters were tripping through my head in that moment.)

A buzz rippled around our circle.

“Next we’ll need to decide where Mr. Elephant is.”

The same voice of sabotage called out, “A volcano!”

Ha! You can’t stop me with lava.

“So second graders, the name of the game is Can You? One person starts telling the story. It’s their job to get the character into some trouble. Then look around at the other storytellers and challenge them to get the character out of trouble by saying, ‘Can you?’ Ready? I’ll start.”

I began to weave a tale of a carefree Mr. Elephant and his friend, Lady Giraffe, hiking up a mountain for a picnic on a beautiful clear day. Then…(or as some kindergarten friends would say musically–duh, duh, duuuuh!) Elephant looked up to see a cloud pass over the sun.

I put our two heroes into a metaphorical pickle and challenged my little friends to get them out of it. One by one the class carried on the tale. Elephant fell toward boiling lava, was rescue/captured and taken to a zoo, escaped, found himself mysteriously at or on top of a castle facing guards with swords (At this point we invoked the no blood rule, or as one girl suggested, no violence. We also pressed pause and discussed how writers could try out one way a story could go, then rewind and try a different path– for example not stabbing but tripping, not tripping but convincing the guards.), in the moat where he couldn’t swim, in the ocean (where he really couldn’t swim!), swallowed alive by a giant octopus who then mysteriously fell back into the cauldron of boiling lava! (Good thing he’d been wearing a lava-proof suit all day.) All this time the circle was contracting as one child after another scooted in closer to the story. Alas! Before we could rescue Elephant once and for all by turning the octopus into a hot air balloon, our bus had arrived.

“Don’t worry,” I consoled them. “You can keep telling Mr. Elephant’s story on the bus. Or you could start a new story. My family used to play Can You? on long car rides.”

Several adventures later (Leaving late meant we arrived at the theater after the play had started.) we’d returned safely to school (There and Back Again, A Second Grade Tale). My principal asked how it had gone and commented on our class huddled together in the lobby. Without any of us noticing, she’d captured the moment. 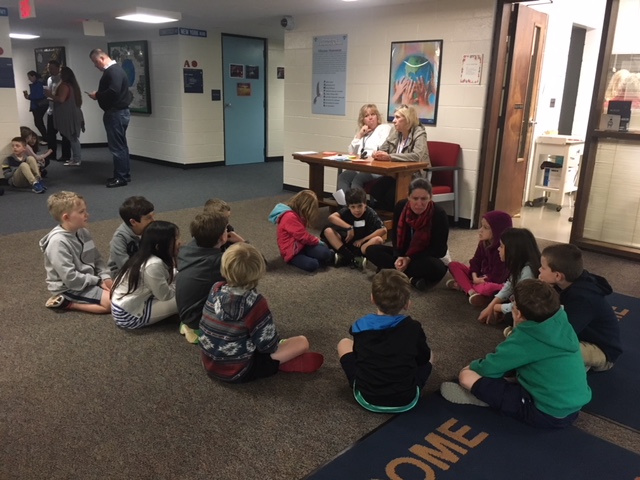 In case you were wondering if a busload of seven year-olds who waited twenty minutes for a bus to arrive, rode 45 minutes to see 40 minutes of a play that had already started actually did use their non-movie theater manners–They did! And it didn’t hurt that we were in the very last row of the theater so when one friend decided to stand or kneel on her chair everyone else could still see. They earned a little late recess after their very late lunch!

3 thoughts on “They’re All Adventures–Some You Expect…”

What Are You Looking For?